Skip to content
Home About Why the Waterfront Streetcar?

Why the Waterfront Streetcar? 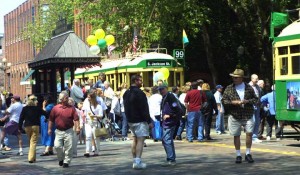 The George Benson Waterfront Streetcar Line, named for the city council member who worked for its establishment, ran along Alaskan Way on the Seattle waterfront from 1982 through 2005. The Streetcar was popular with citizens and tourists alike, as it provided the only public transportation along the busy Seattle waterfront.

The semi-official history of the Waterfront Streetcar was written by George Benson, and is available at HistoryLink. Another summary history, and some nice pictures of the line in operation, may be found at RailwayPreservation.com.

The Streetcar's maintenance barn was torn down when the Sculpture Park was built, and the cars were placed in storage during what was to have been a short temporary hiatus. A maintenance facility was to have been included in a development in Pioneer Square. That development did not happen, and the future of the waterfront has been uncertain during the debate on replacing the Alaskan Way Viaduct. There are now big plans for redeveloping the waterfront, but those plans do not include any transit components.

There has never been a publicly-announced decision regarding the future of the Waterfront Streetcar. However, some of its tracks and facilities have been removed, and the cars themselves are reportedly for sale. The Waterfront Streetcar would be an attractive and practical means of moving citizens and tourists along the waterfront, and would be a tourist attraction in its own right (just as the F-Market streetcar line is in San Francisco's revitalized Embarcadero district).